Dear Forbes: This Is Why Iggy Azalea Doesn’t “Run” Hip-Hop 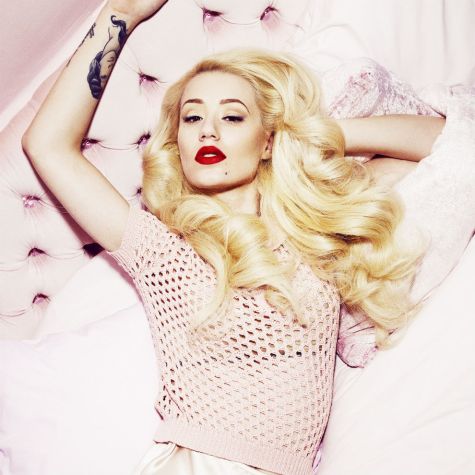 I’m annoyed for multiple reasons. Let’s discuss them, shall we?

First off, I wouldn’t go to an Iggy Azalea concert if it were happening on my front porch. While I understand (somewhat confusedly) that she does have something of a fan base, anyone who has any love for hip-hop is currently decrying the notion that this woman “runs” hip-hop. Or anything at all, really. But that’s why the article title was changed, right? Because it (as the update reads) “did not accurately reflect the content of the piece.” Nor does it affect, um, reality. So yeah, good choice, Forbes. But you’re not off the hook.

Let’s get into the article. Here is the author’s reasoning for what he calls Iggy Azalea’s “notable” “rise to prominence”:

“Making a name for yourself as a woman and hip hop is laudable enough, forget the fact that she is a white, blonde, Australian woman. In a genre dominated almost exclusively by African American men she sticks out like a statuesque thumb.”

Yes, making a name for yourself in hip-hop as a woman is laudable. But lauding Iggy Azalea here is ludicrous. The author seems not to understand the fact that it is precisely because Iggy Azalea is white and blonde that she has “made a name for herself” in hip-hop. White privilege has successfully floated her to the top of a genre where black women have fought for decades to be represented: her presence (and success) in hip-hop isn’t a shining beacon for feminism, but for the power of whiteness and what it can accomplish.

The author goes on to say:

“While this is all happening very quickly for her in America, she has actually been honing her craft for a decade now, first rapping at the age of 14. In the ten years since, she has seen and been through all the trials and tribulations of the industry.”

Really? All the trials and tribulations of the industry? All of them? Black female rappers encounter a unique struggle in their journey to success in an industry bent on attacking (and exploiting) black female sexuality, not to mention the complex dichotomy of battling male rappers on their misogynist lyrics while also being pressured to support the genre of hip-hop as a whole. The experience of black women in hip-hop is nearly analogous to life outside of hip-hop: black women being asked to choose between supporting black men in the struggle against racism and supporting their own struggle against misogyny (and misogynoir.) Has Iggy Azalea had to make these choices? No. Rather, she is flippant about the subject of race, spitting this lyric in her song D.R.U.G.S:

When it really starts I’m a runaway slave…master

Shitting on the past gotta spit it like a pastor”

“Shitting on the past,” huh? Bye Iggy.

In the end, the idea that Iggy Azalea’s fame is “unlikely” is equally absurd. Of course it’s likely. A woman who represents every patriarchal and white supremacist ideal of beauty—tall, slim, undoubtedly white-featured, blonde—finding success in an industry that champions these qualities is entirely unsurprising, especially in a genre that is, as the author says, “dominated almost exclusively by African-American men.” Iggy Azalea is not a success story I wish to celebrate. To me, she isn’t a success story at all: she is a novelty, a tiresome example of white female privilege and the delight white culture finds in white people appropriating any and everything.

Lastly, I would ask Hugh McIntyre if he has heard of FM Supreme. Awkwafina. Dominique Young Unique. Rapsody. Jean Grae. 3d Na’Tee. Women of color in hip-hop who are making a name for themselves against all odds. They run hip-hop. Next time you’re feeling all gushy about women in hip-hop…maybe write about them.

149 thoughts on “Dear Forbes: This Is Why Iggy Azalea Doesn’t “Run” Hip-Hop”