On Women, Friendship, and Ass-Kicking in Fiction

Do you remember my piece about isolationism in American media? In it, I wrote about the way Hollywood takes characters of color and isolates them on screen and in the imagining of their character, effectively tokenizing them and driving home the message of solitary existence. Those characters are cut off from other characters of color, making them more easily dominated by the white characters onscreen. We know the same thing is happening with female characters. I wrote about the Bechdel test in that same post and the way women in Hollywood rarely interact with one another onscreen, making female bonding impossible.

Well, the same thing is being done in popular fiction, and I’m sick of it.

For one, I’m sick of the focus of relationship-building in books like The Hunger Games being on romance over friendship. At this point, the genre of Young Adult Fiction should just be called Young Adult Romance. Sure, Katniss kicks ass. But where are her bonds with female characters? Yes, there are her sister and Rue (briefly) but the majority of the series focuses on the love triangle between Katniss, Peeta, and Gale. And don’t even get me started on Twilight. Bella Swan kicks far less ass (far, far less ass) than Katniss, and the relationship between Bella and Edward’s sparkly behind is weird and unhealthy. Even in Harry Potter—which I hate to slander—the brilliant Hermione Granger doesn’t have any real girlfriends. Harry and Ron are it, and one of them is a love interest. And what about adult books? 50 Shades of Grey? Don’t even get me started.

What’s happening to female friendship in fiction? It scares me that it’s going the way of the dodo in the face of popular romantic plotlines, in which the only important relationships are the ones in which sex is involved. Hermione Granger was smart and no-nonsense, but she was alone. It is not enough to simply have one dynamic female character. There must be many. They must talk to each other. Otherwise, we are teaching young readers (and adult readers) that strong women exist alone, in competition and at odds with other women. “You can kick ass,” we tell them. “You can take on the world. But you’re gonna be kicking ass by yourself.” The books that have resonated with me throughout my life—and, indeed, the ones that have shaped the person I am—aren’t like that. They’re books like Sula, The Color Purple, The Handmaid’s Tale, The Bell Jar: books in which the relationships between women are strong and deep and complicated. The books in which women are not alone, even as we come apart and put ourselves back together again. Characters that, even as they set out on long journeys to discover themselves, do so with a tribe of women to support them along the way. I’m not seeing these relationships in mainstream books: I’ve been missing a book that explores the connections between women, the bonding we do that is separate from men and sex and romance.

So I wrote one.

I’m telling you this because there are over 2,000 of you that are subscribed to this blog, and if you’re still here by now, something tells me you might be missing this book too. So far you’ve only read my nonfiction: my ranting about #WhiteGirlsRock, my disgust for Miley Cyrus. Now I feel it’s time to share my fiction with you, with the hope that it might give you something you’ve been looking for.

I’m self-publishing it because….well, mainstream publishers want a love interest that takes up half the plot-line. They don’t believe in the power of a book that exists to highlight the bonds of women, especially in the context of the apocalypse, which is what my book takes place within. But I do. I do believe in it, and if you’re still here, you do too. In Panther in the Hive, as this book is titled, Tasha Lockett is a biracial former fashion-addict who fights for survival in a post-apocalyptic Chicago, all the while learning that it may not be only a blade that saves her life, but the friendship of other women as well.

I’ve started a campaign for the book here. I urge you to contribute. $3 from each of you could put this campaign at goal. And if you share this campaign? Who knows what will happen. Maybe we’ll finally have a mainstream book that tells the lives of women as whole human beings.

ps. Want a sneak peek into Chapter 1? You know you do. Peep it here.

Catching Fire and the Limits of White Imagination

After watching Hunger Games: Catching Fire this weekend, I was pleased to see that Beetee, the brilliant inventor and electric genius from District 3, was played by none other than Jeffrey Wright. I was also pleased that I didn’t hear any muttering in the theater about the fact that Beetee was black. We all remember the disgusting racist backlash when the first installment of the film cast Amandla Stenberg, a young black actress, as Rue (despite the fact that Rue was indeed black in the book). But my pleasure didn’t last long. The next day on the bus, I overheard a young woman and her friends—who had just come from the film, apparently—exchanging their thoughts about what they had just seen, and the young woman said, “I thought it was awesome. Well, except for Beetee. Why the f*ck did they make him black? Beetee wasn’t black.”

Folks. Let me tell you something. You might want to sit down, because this could be a shocker for you. Here it is. Are you ready?

The Hunger Games is not real. (gasp) I know. Stunning. This dystopian world in which children are sent into an arena to fight to the death is, in fact, fictional, imaginary, fantastical. And you know what that means. That means that the appearances of the characters therein are also not real. That is, they are subject to the imagination of the reader. Katniss is described as “olive-skinned,” which can be interpreted semi-loosely, but Beetee? He was merely described as having “ashen skin” and black hair. Lots to play with there. Right? It’s a book. He looks different to all of us in our heads.

But that’s not what this is really about, is it? After hearing this young woman’s comment, I jumped on Twitter and searched mentions of Beetee’s name. I came across the usual racist vitriol, but there was the occasional tweet that looked like this:

I saw more of the same in comment sections on various articles around the web—Never read the comment sections, guys. Really.—and it has led me to believe that the problem isn’t that Hunger Games purists who believe that Beetee looked a certain way were disappointed that the film strayed from that representation, it’s that white audiences in America are afflicted with a certain limitation of the imagination when it comes to the representation of characters they are fond of. Something that struck me as very interesting was the following tweet: 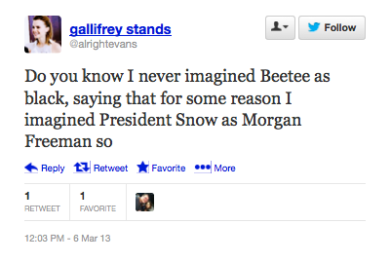 It is difficult to imagine benevolent geniuses as black, it seems, but quite easy to imagine villains as black. This is telling, isn’t it? Telling that the white imagination, when provided in a book with descriptions of a “good guy”—intelligent, valuable, kind, even gentle—imagines that character as white (like themselves) but when provided with descriptions of a villain, a killer, a dangerous maniac…imagines that character as a black man. Morgan Freeman. Who has overwhelmingly portrayed “good” characters in his career as an actor. He even played God once, if memory serves. What is it, then, that causes the white imagination to provide his face as a stand-in for what they imagine as a ruthless child killer in a fictional world?

His blackness. And only that.

As white people, we are used to representations of ourselves crowding the covers of magazines, crowning the posters of newly released films. The good guys are white, we have learned, after eons of our faces being plastered under cowboy hats and in impeccable Bond suits. White men are Superman, we have learned. White men are Ethan Hunt and Neo and white men are hobbits. Bad men, we have learned, are black. They’re gang bangers and thugs and talk loud and sometimes deliver funny lines where we laugh at their Otherness. Black men aren’t heroes, we learn. Our imagination and subconscious are so saturated with white supremacist notions of goodness, beauty, and heroism, that when confronted head-on with an image of a black man who is brilliant and kind and normal and who saves the day, we transform into robotic versions of ourselves: Does…not…compute. Hero…must be…white. It’s this line of thinking that turned Disney’s Princess Tiana into an animal for 95% of the movie. The collective white imagination had difficulty imagining a black girl as a princess…and so she became a frog.

This isn’t about staying true to the book. Suzanne Collins was vague (I believe purposefully so) with the descriptions of her characters, so when we say “I didn’t picture Rue as black,” or “No, Beetee was white,” it is not the text that is leading us. We’re following a different illogical path of logic, one in which everything we believe about ourselves as white heroes and heroines is being contradicted. The notions taught by patriarchy and white supremacy do not only effect our day-to-day encounters in reality; they shape our imaginations and our expectations, our intangible realities.

But unlike the tributes who enter the arena in The Hunger Games, we have a choice. We can choose. We can choose to step aside on what we’ve been taught is our pedestal of greatness and acknowledge that there is room for more. We can choose to transform our ideas of heroes and who can be good, and kind, and brave. The alternative is bleak. If even our imaginations are irrevocably bound to what patriarchal and white supremacist doctrines prescribe, then we’re in trouble. The moment we kill the thing in us that imagines change and difference and growth is the moment we kill any hope of a better world. The world in The Hunger Games may not be “better,” but how much worse is it really when it can imagine a genius hero who is black…and we can’t?