This Is Why We Still Don’t Need #WhiteGirlsRock

Below you will find an excerpt to my latest blog,”Why We Still Don’t Need #WhiteGirlsRock,” which has been published on Huffington Post. I encourage you to read it here.

It’s a subtle kind of murder, the killing of black girls’ self-confidence. In a culture like ours that regularly dehumanizes and denigrates the bodies and identities of black women — even the First Lady of the United States isn’t exempt, after all — it’s easy to miss the often indistinct ways that black girls and women are cast as inferior to the identities and pursuits of white women.

In the face of critics who are already writing brainless articles about why the new Annie will “probably be terrible,” I am ecstatic. In the midst of those who shout down Quvenzhané Wallis for being too spunky, too confident, too something, I am absolutely psyched for this movie and I’ll tell you why.

Because it’s about a black girl. A black girl who lives.

A blogger and thinker who I’m a big fan of, Son of Baldwin, posted the trailer to the new Annie on the Son of Baldwin Facebook page. The caption to the post: “I hope this movie makes black girls everywhere feel visible and cherished.” I could echo those sentiments a million times, and I will add to them here: I am excited about this film because it is a story about a black girl who wins.

For those of you who are asking why we need to focus on the concept of black girls winning, I will cite an earlier blog of mine here. Yes, it’s needed. Positive portrayals of black girls and women in mainstream media are far and in between, especially in the context of coming of age stories. A coming of age story is one that focuses on the psychosocial development of a youth or a group of youths and it usually involves great conflict and transformation. So often these stories focus on boyhood: formative experiences like those in Stand By Me. Google it. Google “coming of age movies” and you will find that the stories our culture says define coming of age are those like The Sandlot or Superbad. For boys of color there are far fewer, but some: Cooley High. Boyz in the Hood. School Daze. Try Googling “coming of age movies for girls” and you’ll find a lot less. The Breakfast Club, which is about young men and women, all of them white, is one that appears. In fact, almost all of the coming of age stories focusing on girls feature all-white casts. Mean Girls. An edgier film about sex and orgasms called Coming Soon. Sisterhood of the Traveling Pants and Clueless are two that appear a lot, both of which cast girls of color but the vast majority of the narrative focuses on the experiences of white girls.

So what about black girls? Their absence is troubling. As a society we give a lot of thought about the formation of women, especially in recent decades: we are interested in their stories. We are curious about their worlds and rituals, especially in the context of a patriarchal society. The telling of stories about women has become more prevalent, although we still lack action heroines that aren’t decked out in cleavage-exposing spandex. But what about black girls, specifically? Black filmmakers fight to get black films into Hollywood. Black folks in general are underrepresented in mainstream media, and when they are present, are more often than not distorted by harmful stereotypes. Especially—as I mentioned above, but I’m going to mention it again—especially when it comes to black girls.

In other cases, black and brown girls are cast less stereotypically in their character but are isolated in a sea of white faces: see Dion in Clueless. Or, just as often, black and brown girls are cast as a sort of tragic foil to white protagonists. See Kerry Washington’s character in Save the Last Dance, who knows what it’s like to be poor and a single mom. Or the Latina character in Secret Life of the American Teenager, Adrian, who is slutty and miserable and alone. We were all psyched to see Rue be cast as black in The Hunger Games…until we remembered that Rue dies in the book. Tragic black girls. Even in Beasts of the Southern Wild, where Wallace first stole our hearts, Hushpuppy survives…but she’s not quite whole at the end of it all. Her coming of age is painful and harsh. Violent. She loses her father and, rather than merely gaining her transformation, she loses her childhood. The black girl lives, but she bleeds. There are exceptions to all this, of course. Akeelah and the Bee was fantastic, but far too rare.

So forgive me if I am excited for Annie. The new Annie, in which Quvenzhané Wallis is beaming and jubilant and visible. She goes through tough times—that’s what a coming of age story is all about—but we all know how Annie ends. Annie wins. I’m not into musicals, but please believe I will be dancing in my theater seat come December. As Son of Baldwin said so well, I am here for a film in which black girls are “visible and cherished.” Loved. Present. Winning.

Why I’m Not Here for #WhiteGirlsRock 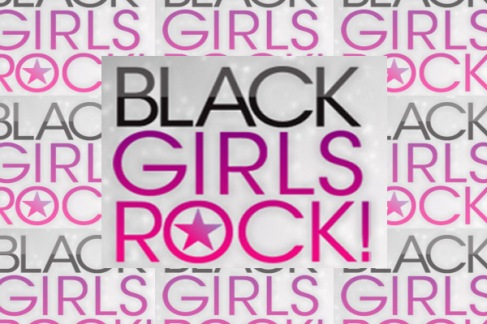 The Black Girls Rock! Foundation was founded in 2006 as an organization dedicated to the empowerment of young women of color; a foundation committed to helping black and brown girls overcome the myriad of obstacles a misogynoiristic society places squarely in front of them. The Black Girls Rock! Awards are now featured on BET as a way of recognizing role models, encouraging teachings of self worth, and emphasizing the talents of extraordinary women of color who are otherwise unseen in American media.

Let me emphasize that last part. “Women of color who are otherwise unseen in American media.” We need Black Girls Rock! because black girls and women are almost invisible in American media. Because if you were a black girl growing up in this country, watching TV and movies and reading magazines like every other kid, looking for some representation of yourself as something beautiful or heroic, you would be sorely disappointed.

I could go on. But I think you get the gist. What it comes down to is that black girls are missing representations of themselves in positive contexts. When they turn on the TV, they are missing. When they are looking at the cover of magazines like Vogue and Elle, they are missing. When they go to the movie theater, they are missing. For black women’s faces to appear in mainstream films, it seems they must be either wearing a maid’s apron or chains. So when Black Girls Rock! appears on the scene, ready to uplift and empower the girls who are so tragically neglected in American media, ready to showcase women of color who are smart and fun and beautiful and accomplished and positive, I am so here for it.

But let me tell you what I’m not here for.

I’m not here for #WhiteGirlsRock. The hashtag appeared on Twitter in an apparent response to Black Girls Rock! that aired on Sunday night with typical nonsense such as: 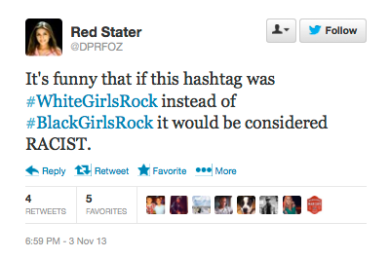 Let me tell you something, white folks. From one white person to another.

You are in everything. 99% of Hollywood movies feature your faces. 99% of magazine covers are covered in you. The Emmy Awards and Oscars are almost entirely you. If you Google “beautiful people” the screen is covered in white faces. Black girls (and boys) are taught from birth that there is one version of beauty, and it is you. Many black girls go their entire lives thinking they are ugly, thinking they need to be lighter, straighter, whiter in order to have value. Everything that you see every day that reaffirms your whiteness; every commercial that has a nice white lady embodying the perfect “mom;” every magazine that has blue eyes and bone-straight hair; every Hollywood blockbuster that has a leading lady with skin never darker than Halle Berry….all of these things are reinforcements of your identity that you take for granted.

You may be fat. You may have hair that curls up at the ends. You may even have acne. But your face is everywhere. Your people are everywhere. What in your heart recoils when you see Black Girls Rock? What bone in your body sees empowerment for black girls and thinks “that’s not fair”? Where is your bitterness rooted? What do you think has been taken from you when women of color are uplifted?

All of the things you take for granted are what you’re protecting when you shout down Black Girls Rock: your whiteness, the system that upholds your face as the supreme standard of beauty, your place in the center of a culture that demands people of color remain hidden in the margins, present but only barely and never overshadowing the white hero/heroine. Your discomfort with black girls who rock tells me that you prefer the status quo: you prefer for black faces to remain hidden, you prefer for America’s heroes to have white faces, you prefer for black actresses to wear aprons and chains.

This is not to say that white girls don’t rock. I’m white. I kind of rock. But this conversation isn’t about you, it isn’t about us. Why must everything always be about us? It doesn’t have to be. And it shouldn’t be. From one white person to another….please sit down. Queen Latifah is on and you’re blocking the screen.